This apple cinnamon babka features sweet apples and a thick cinnamon filling twisted inside a rich and buttery yeasted dough. Finish the indulgent loaf with a buttery brown sugar cinnamon crumble topping and bake until golden brown. This is a must-try recipe and it’s impossible not to love!

This recipe is brought to you in partnership with Red Star Yeast.

Babka has a rich history. When I read more about the treat as I worked on today’s recipe, I learned that it originated in the early 1800s with the Polish Jewish community. Leftover challah dough was filled with jam or cinnamon, rolled up, and baked. The babka we see all over the place today, I read, is much richer and sweeter than its ancestor. You can find it filled with chocolate or almond paste—this is my favorite chocolate version—or the newer babka variations with pizza fillings, Nutella, pesto, and more. Food52 has an in-depth article all about babka if you want to read more about its history and popularity today.

I first tried my hand at homemade babka a couple years ago. Who’s made the Nutella babka recipe before? If you loved it, you’re in for a treat today. If you’re not a fan of Nutella, you’re also in for a treat today. I revamped the dough so it’s (1) even richer (2) even flakier and (3) only yields 1 loaf instead of 2. In terms of taste and texture, it’s more like a brioche loaf than croissant bread. We’re filling it with a thick layer of sweet cinnamon and you can use your favorite variety of apples. If I’m being honest, this apple cinnamon babka has to be one of the best things I’ve made all year. Between all the recipe testing, today’s photos, the video, and making it for a few friends, I’ve baked about 12 loaves by now. And there’s NEVER a crumb leftover.

In case you’re wondering, our self control is stuck inside one of those apple cinnamon swirls. I’m positive you’re going to obsess over it too.

The full written recipe is below, but let me walk you through the steps so you can understand the process before starting.

Serving/Slicing Tip: For neat slices, I recommend cooling the babka completely before slicing. The bread has so much filling that it will fall apart if sliced warm.

Here is the dough after you mix the dough ingredients together:

Here is the dough after it rises and then after you punch it down:

Soften the apples on the stove and make the cinnamon filling:

Spread cinnamon filling on rolled out dough and top with apples:

Left photo below (before 2nd rise): Fold log in half, then twist into a figure 8. Place into your greased loaf pan, then let it rise until puffy, about 1 hour.

Right photo below (after 2nd rise): Dough is nice and puffy. Brush with egg white, poke holes in the loaf to prevent separation, then top with crumble topping.

Bake until golden brown. The brown sugar cinnamon topping melts down, some apple cinnamon filling may seep out creating jammy-like edges and crevices, and the entire kitchen smells like fall. This is SO GOOD:

In Short, This Apple Cinnamon Babka Is:

For an easier apple cinnamon recipe without yeast, you’ll enjoy this apple cinnamon bread. And don’t forget to try my fresh and easy apple cake if you find yourself with a plethora of apples! 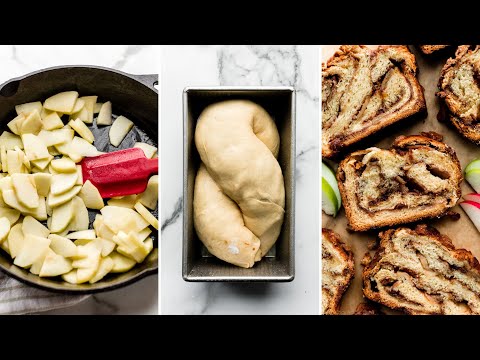