Homemade apple cider donuts are cakey, dense, and intensely flavored. Baked, not fried, these fall treats come together quickly and easily – a convenient recipe with no mixer required. The trick for big flavor is to use concentrated apple cider. Make the morning less hectic by reducing the apple cider the night before. Read on for all the tips you need to make this Fall favorite!

I love those delicious donuts that you get at the bakery…they’re rich, dense, and smell absolutely amazing. If you’ve ever tried my chai spice donuts, pumpkin donuts, or cinnamon sugar donuts, you know that those bakery beauties definitely inspired my donut recipes. They are somewhat dense and very muffin-like. These baked apple cider donuts are no exception, though they are a little heavier with a more substantial and moister crumb.

Tell Me About these Apple Cider Donuts

This Trick Changes Everything

The trick to apple cider donuts is to flavor them with concentrated apple cider. Apple cider that has been reduced down on the stove is thick and potent, adding big flavor without excess liquid. Apple cider, either store-bought or this homemade apple cider, is certainly delicious to drink but it won’t add enough flavor to baked goods. Taking 20 minutes to reduce the cider down transforms regular donuts into amazing apple cider donuts. If you like to keep things simple in the morning, reduce the cider the night before. That will save you cooling time, too, because the cider must cool for a few minutes before you add it to the batter.

To reduce your apple cider, simply follow these simple steps:

It’s that easy! If you have leftover apple cider, use it in my honeycrisp apple sangria or apple cider sangria— or drink it plain.

Here’s my reduced down apple cider:

By the way, if you’re a fall baking fanatic like me and love pumpkin treats, you might try making your own pumpkin pie spice blend, too! Use it in pumpkin-inspired favorites like pumpkin cookies, pumpkin cake, pumpkin bars, and of course, pumpkin pie.

These couldn’t be easier to make– no mixer required. Leave yourself enough time (at least a half hour) to reduce down the apple cider before beginning. I like to do this step the night before so it’s ready to go in the morning.

Look at this beautiful caramel-colored batter! So much apple flavor hiding in here:

Baked, cakey, and delicious apple cider donuts are made with apple cider reduction to intensify its flavor. Warm and dipped in cinnamon sugar and apple pie spices, this fall treat will become your new favorite too. 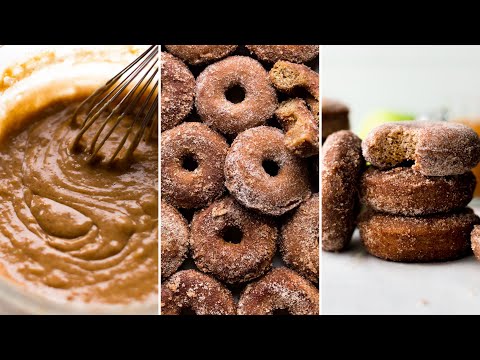