This brownie baked Alaska combines homemade brownies with your favorite ice cream flavor (like mint chocolate chip) and is topped with toasted marshmallow meringue for a truly memorable and impressive treat.

After receiving many requests for the recipe, as well as my own desire to tackle this “difficult” retro dessert, I devoted some time recipe testing baked Alaskas. 3,845 quarts of ice cream later, let me present you with baked Alaska and baked Alaska cupcakes. Let’s get one thing straight, though…

What is Baked Alaska?

The meringue topping, applied in decorative peaks and swirls, completely encloses the ice cream underneath. The entire thing is baked or torched until the meringue is toasted. Baked Alaska can even be served flambéed, but I definitely don’t trust myself doing that. The ice cream doesn’t initially melt under the protective meringue shell, but will begin to deliciously drip down into the brownie once served. Baked Alaska is an impressive dessert and, like I said above, so darn good with a brownie base.

The bowl molds the ice cream into the dome shape for the baked Alaska dessert. Lining the bowl with plastic wrap, as you watch in my video below, allows for easy removal when it’s time to assemble the brownie baked Alaska.

Both brownie recipes are perfect for the brownie baked Alaska cupcakes, too. Cupcake baking time is similar for both recipes and included in the written recipe below.

How to Make Marshmallow Meringue

The marshmallow meringue is pretty much Swiss Meringue Buttercream, just without the butter. You can watch me prepare the meringue in the helpful video below. Whisk egg whites, sugar, and cream of tartar together constantly over a pot of simmering water. The egg whites will gently heat and the sugar will dissolve. The cream of tartar stabilizes and shapes the egg whites, just like it does in these chocolate swirled meringue cookies, chocolate soufflé, French macarons, and these angel food cupcakes.

Baker’s Tip: When gently cooking these 3 ingredients together, simply use a large pot and bowl. You can use the stainless steel bowl that comes with your stand mixer or a glass bowl (I used one from the set). You’ll need your stand mixer in the next step anyway.

Once the egg whites, sugar, and cream of tartar are gently heated, begin whipping. This step incorporates air into the meringue and after a few minutes, you’ll have stiff glossy peaks. Go ahead and taste it. It tastes like homemade marshmallow creme.

You Can Use a Kitchen Torch for Baked Alaska

Spread that marshmallow goodness all over the ice cream and begin torching. I suppose this should be called “torched Alaska” instead? I know many don’t own a kitchen torch, so oven instructions are included in the recipe below. Baking is the more traditional step anyway. (But I will say one thing! Kitchen torches are surprisingly inexpensive for what you get and when my mom offered me hers, I thought to myself… will I ever use this thing? and the couple times a year that I need it, I’m glad I have one. It really makes a difference!)

You’ll use a torch again when you make no bake s’mores cake and chai pumpkin meringue pie.

The mini baked Alaskas are so much fun and, conveniently enough, much quicker and easier.

Simply scoop any flavor ice cream on top of the baked and cooled brownie cupcakes, then cover with marshmallow meringue topping. I know many of you will appreciate the simpler cupcake version.

Want to make the brownie baked Alaska cupcakes even more exciting? Use different flavor ice creams so it’s a surprise which flavor you’ll get!

Baked Alaska, the big guy or the smaller cupcake version, is wildly fun. If you’re looking for a unique dessert with a mega wow factor, this one’s it. Everyone… and I mean everyone… will be impressed. You can begin preparing it a few days ahead and the meringue-covered Alaska holds up well in the freezer before torching/baking. And using your favorite ice cream flavor is an awesome way to customize it for your crowd. 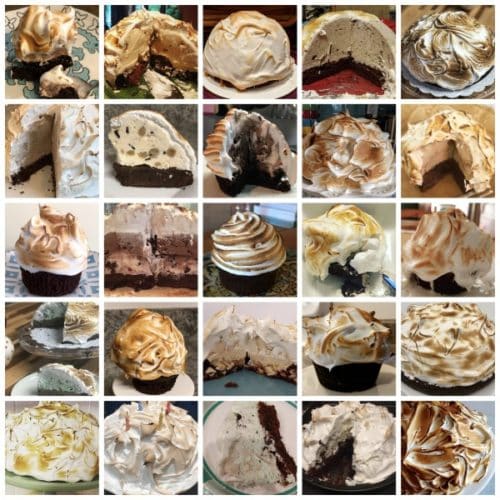 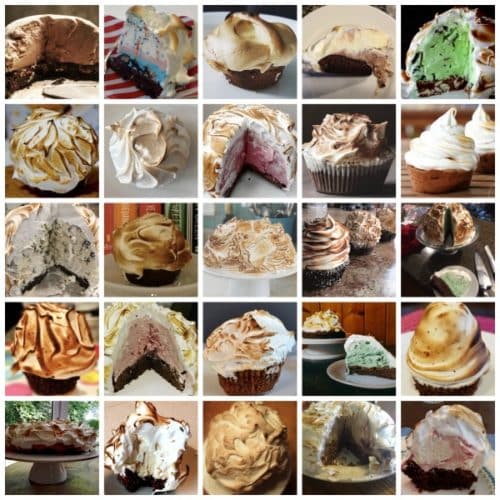 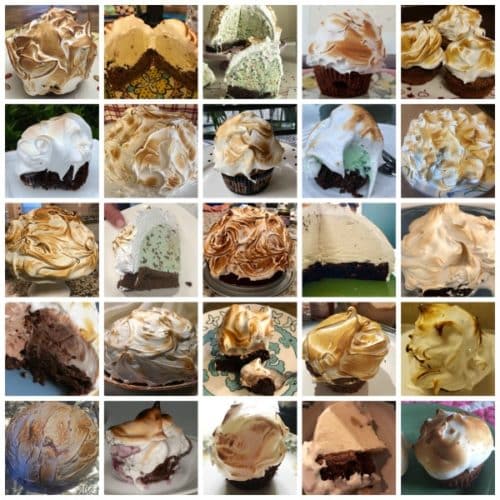 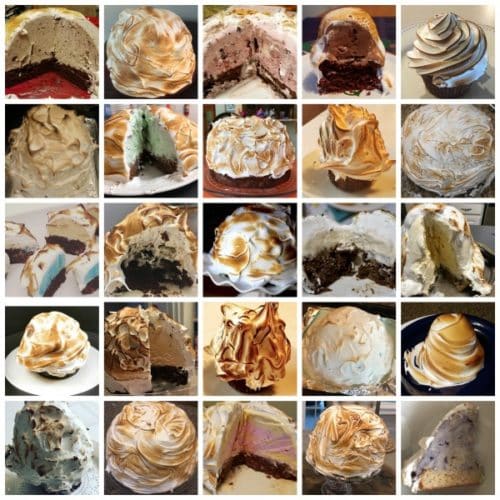 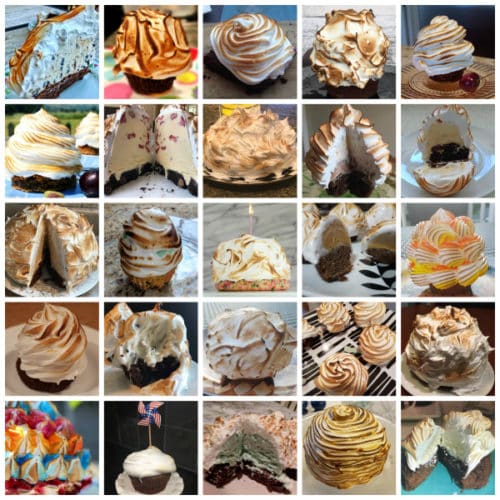 Many readers tried this recipe as part of a baking challenge! Feel free to email or share your recipe photos with us on social media. 🙂