Caramelized banana pudding is a fun variation of the Southern classic. Made with layers of brown sugar caramelized bananas and real from-scratch pudding, you won’t be able to stop at just 1 taste. Layer with vanilla wafer cookies and top with extra fluffy cinnamon spiced whipped cream.

But it’s fun to play around with different flavors and variations. If you love cinnamon, brown sugar, real homemade pudding, billowy whipped cream, and bananas (raises hand *so high*), this dessert is totally for you.

If you ever need a vanilla pudding, use this one. It’s my favorite– perfectly creamy and sweet, extra soft and buttery, and easy to make ahead of time. I love using this pudding in a trifle, layering it with sliced strawberries, cubes of brown butter pound cake, and topped with whipped cream. The recipe yields 4 cups.

You need the 8 ingredients pictured above: whole milk, heavy cream, sugar, salt, egg yolks, cornstarch, vanilla extract, and softened butter. Cook those 1st 4 ingredients together on the stove, mix the egg yolks and cornstarch together (below, left), then temper the egg yolks into the milk mixture. Whisk constantly, cook together, then remove from heat and whisk in the vanilla extract and butter. The stovetop process is similar to butterscotch pudding.

Overview: How to Make & Assemble

This is the easiest part of the entire recipe– you can’t really mess it up. Line half of the vanilla wafers on the bottom of your dish. Evenly top with half of the caramelized bananas. Give the pudding a quick stir. If it has thickened considerably and isn’t pourable, whisk in a splash of milk to help thin out. Pour/spread half of the warm pudding on top. Top with remaining vanilla wafers, then the remaining caramelized bananas. Finish with the rest of the pudding, then spread whipped cream in a generous layer all over the top.

Chill the dessert for at least 4 hours and up to 1 day. The pudding will thicken, the flavors will mingle, and the vanilla wafers will soften. After or close to 24 hours, the wafers may taste too soggy and the bananas will begin to release some liquid.

For best taste and texture, serve within 24 hours.

I usually assemble this no-bake dessert in 2.5 quart pan. The ceramic one I use in these photos is from Crate & Barrel, but– sadly– I can’t find it on the website anymore. If you’re making individual banana puddings or 1 large trifle, keep in mind that this recipe yields a lot of whipped cream, so feel free to reduce down.

This is a fun variation of the classic Southern dessert. Made with layers of brown sugar caramelized bananas and real from-scratch pudding, you won’t be able to stop at just 1 taste. Layer with vanilla wafer cookies and top with extra fluffy cinnamon spiced whipped cream. 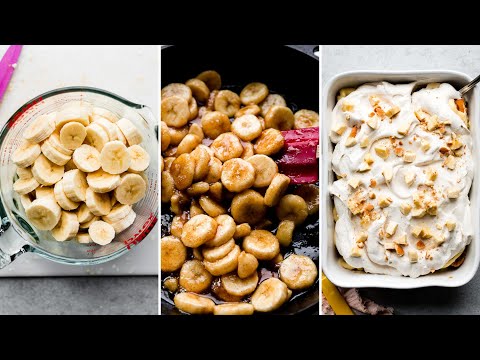