This coconut cream pie recipe features a thick and creamy coconut filling, crispy homemade pie crust, mounds of sweet whipped cream, and toasted coconut. Blind bake the pie crust first, then chill the pie filling until thick and lush. It may be helpful to review my tutorial on how to blind bake pie crust before getting started.

Coconut. You either love it or hate it.

Considering my adoration for coconut cake, you know I fall in the first category. And if you’re reading this, I assume you do too. Obviously this is what you need to make next!!

If you’re not in the coconut gang, you should probably skip this one. But coconut cream pie isn’t *just* for coconut lovers. If you appreciate thick creamy pies, flaky pie crust, and all that fresh (not store-bought!) whipped cream has to offer, you’ll enjoy each forkful.

I’m hosting Easter Sunday this year and have my heart set on coconut cream pie for Easter dessert. I worked HARD on this recipe, taking what I learned from butterscotch pudding and banana cream pie, then incorporating both into a coconut variation. Let’s dive in.

Let’s watch how to make coconut cream pie in a quick video tutorial. I walk you through each part of the recipe, including blind baking the pie crust.

This pie is made completely from scratch!

Some pie recipes call for fully baked crust and some recipes need a partially baked crust. Lemon meringue pie requires a partially baked pie crust because it will continue to bake with the filling. Coconut cream pie, like French silk pie for example, is a no-bake pie– the filling does not go in the oven. We obviously don’t want to eat raw pie dough, so we need a fully blind baked pie crust.

I published an entire tutorial about how to blind bake pie crust. I repeat *some* information here, but I encourage you to review the tutorial prior to beginning this coconut cream pie recipe.

This baked pie crust “shell” is crispy, flaky, and ready for a creamy coconut filling.

Most of the time, coconut cream pie is nothing more than vanilla pudding with some coconut thrown on top. Let’s make a REAL coconut filling using thick coconut milk. Since coconut milk doesn’t have a very strong flavor, we’ll add sweetened shredded coconut and a splash of coconut extract. Don’t have coconut extract? Leave it out. The sweetened shredded coconut adds plenty of flavor. Here is a run-down of the ingredients:

Like most homemade pudding, the coconut filling is made on the stove.

Bring the coconut milk, half-and-half, sugar, and salt to a boil. Whisk the egg yolks & cornstarch together and have them ready for tempering. To temper, add *some* of the boiling coconut mixture into the egg yolks, then add it all back into the pot. This *slowly* raises the egg yolk’s temperature. The purpose of tempering is to prevent scrambling them. You can watch me temper the egg yolks in the video above.

Off-heat, stir in the coconut, butter, vanilla, and coconut extracts. Next, pour the warm pudding into cooled crust, then cover and chill until thickened.

The coconut filling must “set” inside the baked pie crust shell. This usually takes about 3 hours, though it keeps in the refrigerator for up to 1 full day… as long as you keep hungry eyes away from it!! This pie is way too tempting, even without whipped cream on top.

Obviously we must add decoration and this pie’s favorite accessory is whipped cream. It’s simply… a must! You can go heavy or light on the whipped cream. I love a big mountain of the stuff, especially paired with the thick coconut filling and crispy pie crust. You need heavy cream, sugar, and vanilla extract. Add a splash of coconut extract too, if desired. Beat the ingredients together until medium peaks form. When you lift the mixer out of the bowl, a slightly sturdy peak should form. It won’t be liquid-y, nor will it be curdled. Keep your eye on it and don’t be afraid to stop the mixer and check the consistency as you whip.

You can pipe or spread the whipped cream on top. I used Ateco 849 piping tip and you can watch me pipe swirls in the video above. Don’t forget to top with more coconut! I actually used coconut flakes that I found at the grocery, but you can use sweetened shredded coconut or any form of coconut flakes you desire. Feel free to toast them, too!

Chill the pie for a few hours or you can serve it immediately.

Want to make coconut cream pie with meringue topping instead? Meringue is a convenient way to use up the egg whites. I recommend this meringue topping. You can toast it with a kitchen torch if desired. It tastes like marshmallows!

And if you dig creamy pie recipes… 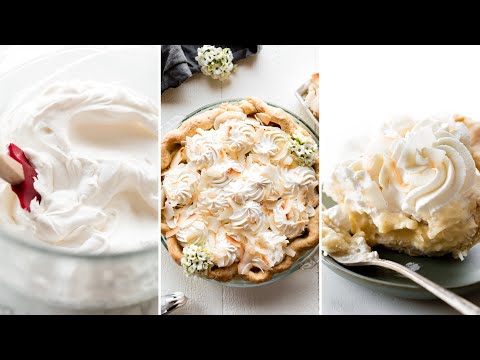