Trifles are an ideal party dessert, especially in the spring and summer. Served in a lovely glass bowl or trifle dish, the presentation is equally impressive and beautiful. You can prepare trifles in advance and even though I recommend homemade cake for those layers, you can definitely get away with store-bought. Especially when you take the time to make homemade whipped cream and homemade lemon curd!

Trifles are as show-stopping as tall layer cakes, but worlds easier to assemble. There’s always an exciting new layer to discover and unlike Rachel’s trifle, each layer is pretty pleasant!!!

She made half an English trifle… and half a shepherd’s pie! (With my classic cheesecake recipe, that makes two Friends desserts in a week lol.)

Today’s lemon berry trifle is my latest kitchen creation. In terms of flavor, it reminds me of this lemon berry yogurt cake. I assembled and photographed it when friends came to visit. It was an instant hit, so I made it again for my mother-in-law’s birthday. The whole family gathered at our house to celebrate, so I chose this dessert not only because it feeds a lot, but for its ease of preparation.

After preparing this lemon berry trifle for two separate large groups, I have some helpful make-ahead tips for you. But first, let’s discuss the layers.

This is my homemade lemon pound cake. Slice and cube the cake after it cools. The pound cake is the foundation of the trifle.

The lemon cheesecake layer was everyone’s favorite. It reminded us of lemon mousse– very light and very airy. Homemade whipped cream not only tops the entire trifle, but is beaten into the cheesecake layer itself. This addition incorporates air into the lemon cheesecake layer, promising a fluffy texture instead of a heavy texture. All of the lemon flavor in this layer comes from lemon curd, so I definitely recommend using fresh. And all of the sweetness comes from the lemon curd and whipped cream. Store-bought versions of both, made with who the heck knows what, will quickly over-sweeten the entire dessert.

The lemon cheesecake layer uses 1 cup of my lemon curd recipe, so you’ll have 1/2 cup leftover.

Other Ways to Eat Lemon Curd

And if you don’t have plans to eat right away, you can freeze lemon curd for up to 3-6 months.

Homemade whipped cream is the finishing touch. You can use heavy whipping cream instead of heavy cream, but with its slightly higher fat percentage, heavy cream makes a sturdier whipped cream. If you’re using your stand mixer, don’t walk away from it. While beating heavy cream into whipped cream takes a few minutes, there’s only a few seconds between perfectly whipped cream (delicious!) and over-whipped cream (lumpy!).

As we finished dessert, I asked for everyone’s opinion.

So there we have it. Lemon berry trifle is a stunning dessert that can be prepared in advance and impresses anyone who takes a bite. In my eyes, that’s the sweetest ending to any party meal! You’ll also love tiramisu, too! 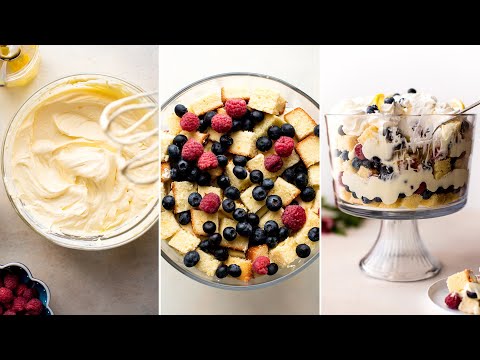