Adapted from my vanilla cupcakes, these magical Sugar Plum Fairy Cupcakes are lightly spiced with cinnamon and nutmeg and filled with fruity jam. Top with vanilla almond buttercream and an array of candies for a perfectly festive Nutcracker treat!

Sugar Plum Fairy Cupcakes are the epitome of festive. In the modern Nutcracker story, the sugar plum fairy is the ruler of the Land of Sweets. We saw the Nutcracker performed by the Pennsylvania ballet every Christmas when I was younger– my sister was a ballerina and danced in it! I used the Nutcracker ballet as inspiration for these candy-topped cupcakes, complete with purple swirled buttercream, gum drops, snowflake sugar cookies, peppermint swirls, and plenty of sprinkles.

Traditional sugar plums aren’t plums at all– they’re small hard candies. The term “plum” refers to their shape and size. So where do we go from here? Flavors that came to mind when creating these sugar plum fairy cupcakes were almond, spice, vanilla, fruity, and definitely sweet.

I asked some readers and many agreed!

I have PLENTY of flavor suggestions in the recipe notes below, just in case “Sugar Plum Fairy” inspires you differently. Peppermint, coconut, orange, you name it!

As usual, we’re starting with my perfect vanilla cupcakes. This cupcake batter yields the softest, fluffiest, and lightest cupcakes. The power ingredients are egg whites, cake flour, and sour cream. These three additions are the difference between dense cupcakes and light cupcakes. Here’s a run-down of the vanilla cupcakes recipe if you’re curious.

Tip: Fill the cupcake liners only about 2/3 full to avoid overflowing.

I had so much fun creating these and decided a video tutorial would be helpful for you. Filling cupcakes is so easy using this little cut-out trick (watch below). I use the same filling method for these cream-filled chocolate cupcakes, too.

For the frosting decoration, I use Wilton #8B piping tip. I LOVE this piping tip and using it is really easy, as you can see in this video.

Use whatever candies inspire you. And, obviously, eat any hard candies separately because you don’t want to head to the dentist with a broken tooth!

The snowflakes are my sugar cookies dipped lightly in this cookie icing. I used these snowflake cookie stamps and they came out beautifully. This sugar cookie dough holds its shape like no other! I topped them with coarse sugar sprinkles for a little sparkle.

Magical, aren’t they? Let me know if you try them!

These magical Sugar Plum Fairy Cupcakes are lightly spiced with cinnamon and nutmeg, flavored with vanilla and almond, and are filled with fruity jam. Make sure you read the recipe notes before beginning. Have fun decorating! 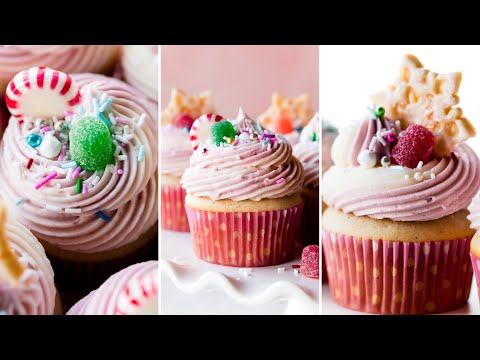