Made with pumpkin in the dough and filled with a gooey pumpkin spice cinnamon swirl, these pumpkin cinnamon rolls hit the spot on chilly fall mornings. They’re topped with maple cinnamon cream cheese icing and you can choose other frosting options if desired! (See right above the recipe for details.) If you’d like to get started ahead of time, use our overnight or freezing instructions below.

This is a rich dough, which means that it’s prepared with fat like milk, butter, and an egg. Rich doughs make soft breads such as monkey bread, homemade cinnamon rolls, and cinnamon roll cake. Lean doughs, on the other hand, are made without much fat and produce crusty bread such as artisan bread, homemade bagels, and pizza dough.

Notice That There is No Cinnamon IN the Dough

Did you know that cinnamon can inhibit yeast activity in dough? This spice can limit dough’s ability to rise, but you’d have to use quite a lot of cinnamon in order for that to happen. Still, with pumpkin being such a heavy ingredient that also weighs down the dough, we skip the cinnamon simply because we don’t want another ingredient holding down the dough’s rise. Nutmeg adds wonderful wonderful flavor to the dough and don’t worry, there’s PLENTY of cinnamon in the filling!

By the way, if you love all of these flavors together, you’ll definitely enjoy sinking your teeth into this pumpkin French toast casserole. And if you are craving cinnamon rolls right now, and just can’t wait for dough to rise, try these no yeast cinnamon rolls. 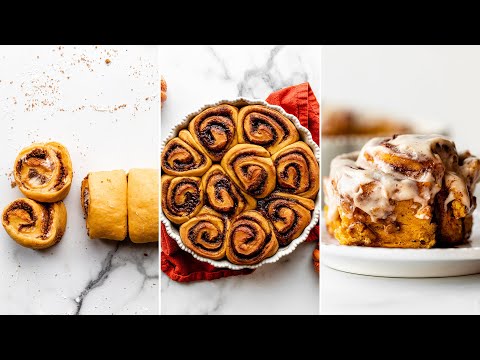