Maintaining all the flavor from my favorite vanilla cupcakes, these confetti cupcakes are soft, fluffy, and extra moist. Creamy vanilla buttercream and extra sprinkles are the perfect finishing touch. I guarantee you’ll use this birthday cupcakes recipe time and time again!

There’s nothing sweeter than a batch of vanilla cupcakes with sprinkles. Unless, of course, those cupcakes include a tall swirl of pink buttercream. Confetti sprinkle cupcakes are the quintessential birthday treat that never goes out of style. I’ve used this cupcake recipe for years and decided it’s time for a helpful video tutorial.

If you’re searching for the most perfect confetti cupcakes, I’ve got you covered!

These confetti cupcakes are my vanilla cupcakes with sprinkles in the batter. The cupcakes are above standard; taking everything you love about professional bakery cupcakes and converting them into a homemade recipe. This cupcake recipe is proven successful time and time again. I use it as the base for chai latte cupcakes, Baileys coffee cupcakes, pistachio cupcakes, coconut cupcakes and more. Here’s why it’s loved:

Use These 4 *Magic* Ingredients

The perfect cupcake texture is the result of 4 magic ingredients.

The amount of batter depends on the recipe. For example, when making my chocolate cupcakes, only fill the liner halfway. Most of my cupcake recipes include the amount in the recipe instructions, but when in doubt, fill about 2/3 full.

You can determine if a batch of cupcakes is done in the oven by testing with a toothpick. Stick a toothpick into the center of the cupcake and if it comes out clean, they’re done.

But here’s what I do instead. Remove the cupcakes from the oven or leave them in, your choice. Gently press down on the center of the cupcake. If the cupcake bounces back completely, they are done. If your finger left a dent in the cupcake, they need more time. This bounce back test works for muffins, quick breads, and cakes too.

Let’s share how I decorated these confetti cupcakes for the photos and video tutorial. I used my vanilla buttercream and tinted the frosting with 1 small drop of pink gel food coloring. I use the big Ateco 849 tip. It makes a GORGEOUS design. You can watch me pipe the frosting in the video tutorial above. I love this piping tip and used it for my peanut butter cupcakes too. Start in the center of the cupcake and swirl upward.

Chocolate buttercream would be great too!

If you are looking for the same great taste and texture in a towering sprinkle loaded cake, try this confetti cake!

These soft and fluffy confetti cupcakes are above standard; taking everything you love about professional bakery cupcakes and converting them into a homemade recipe. For successful results, follow this recipe closely including using cake flour, only egg whites (no yolks), and sour cream. If desired, use chocolate frosting instead. 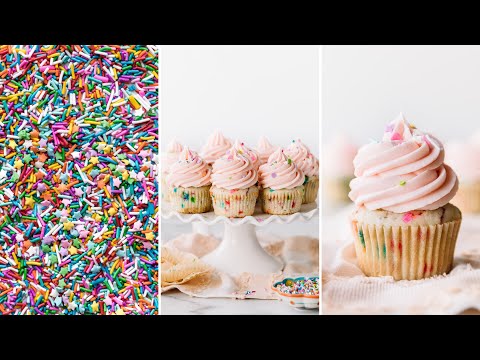